COVID-19 Updates: Learn about our commitment to cleanliness X

The coronavirus pandemic is rapidly changing the daily routines of millions of Americans as many settle into their new self-isolation realities.

Some are finding ways to pass the time by streaming television shows, movies and classic sports (and, of course, listening to NPR).

Other companies — outside the traditional streaming sites such as Hulu, Netflix and Amazon — are making content available during the era of social distancing. But some companies, musicians and others are lending their services and talents for free in an effort to help all of us make it through these uncertain times with a bit more ease.

Below is a small list of what is out there.

The Met, like many live performance venues, canceled upcoming shows because of the spread of the coronavirus. Earlier this week it began streaming for free encore presentations of its Live in HD series.

"During this extraordinary and difficult time, the Met hopes to brighten the lives of our audience members even while our stage is dark," the company said in a statement.

If theater is your jam, Playbill, which many theatergoers will know as those printed programs handed out before shows but is also a monthly magazine, has a treat for you. It's got a list of 15 offerings it says are "some of the best filmed Broadway shows to know about and where to find them."

The list includes Rent, Cats, Nicholas Nickleby and Peter Pan, which can be viewed on various streaming platforms as such as BroadwayHD (which has a seven-day free trial period), Amazon Prime Video and YouTube, among others.

How about penning a play yourself?

Renowned playwright Lauren Gunderson this week began helping aspiring artists in quarantine live out their dreams by offering a writing tutorial. It began with Wednesday's course Playwriting Class Part 1, Beginnings and Endings, which she broadcast via Facebook from her home in San Francisco. An added treat is the children screaming in the background.

With live music festivals such as Bonnaroo, Eurovision and SXSW canceled or postponed because of the pandemic, orchestras like the Seattle Symphony are offering free broadcasts via YouTube and Facebook. "As our community comes together in this time of crisis, the Seattle Symphony will continue sharing performances that provide strength, comfort and joy," the symphony's website reads.

London-based concert hall Wigmore Hall is doing something similar. Wigmore, which announced it was closing its doors for nearly a month, "will be sharing exceptional performances, masterclasses, talks and more from past events at Wigmore Hall" until its planned reopening April 14, Director John Gilhooly said in a statement.

As NPR reported earlier this week, some musicians including Josh Groban; Ben Gibbard, the lead singer of band Death Cab for Cutie; rapper Fat Tony; and the Indigo Girls have opted to create their own "mini" concerts, taking them directly to fans via their social media platforms.

Want to feed your brain with something other than constant coronavirus updates? The eight Ivy League schools are offering hundreds of online courses to the public for free.

Dhawal Shah, founder of the online course aggregator Class Central, compiled a list of more than 400 classes that are available in subjects as varied as Machine Learning for Data Science and Analytics from Columbia University; HOPE: Human Odyssey to Political Existentialism from Princeton University; The Science of Well-Being from Yale; and Gamification from the University of Pennsylvania.

Not interested in stimulating your brain? How about your body? Many gym chains across the country have shuttered but are offering online classes for free. 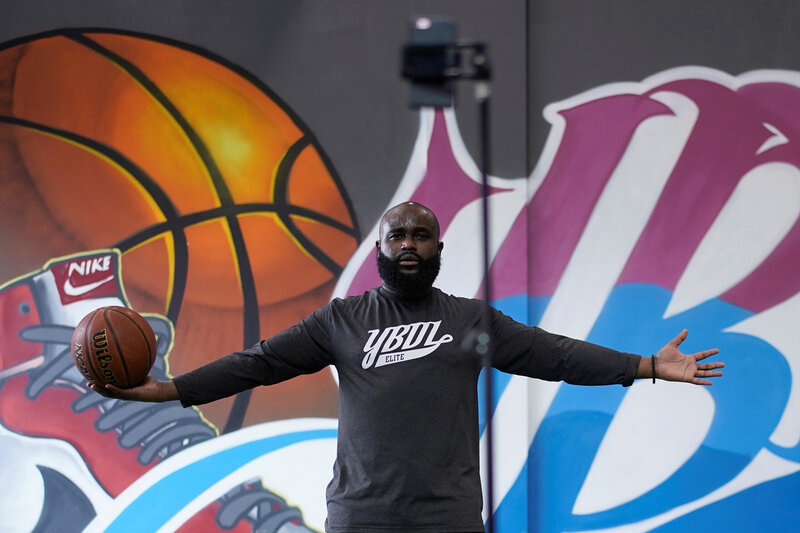 Coach Elie Rwirangira conducts a basketball lesson through a live-streaming session at YBDL Campus in Shanghai, China on March 12. Many people and companies are providing free online classes to stay fit.

Peloton is offering new users a 90-day trial on its app. This news comes as the company announced the closing of its showrooms until at least March 29. It added that this week it began producing content from its new studios in New York, "but it will be entirely closed to the public until further notice."

Golds Gym is offering free access to its app, Goldsamp, until the end of May, where more than 600 audio and video workouts along with DJ mixes get you ready to work up a sweat. Planet Fitness is offering "Home Work-Ins" streamed live at 7 p.m. ET daily on its Facebook page.

If you are looking for something to offer strength and maybe a little stress relief, there are some paid yoga sites that are now providing some online classes for free, including Core Power Yoga and Down Dog.

With all the major sports leagues shut down, some of the leagues are dropping their subscription fees to their paid streaming services. While sports fans may not be able to get their live-action fix, at least they can relive (or perhaps experience for the first time) some classic games and rivalries.

Starting Friday, the National Hockey League is making all games played during the suspended 2019-2020 regular season available to stream on demand. Additionally the league launched "NHL Pause Binge" on its website and YouTube channel, allowing fans to view documentaries and "full-length classic NHL games dating from the 1950s to present day."

The NBA and NFL are providing similar offerings through NBA League Pass and NFL Game Pass.

If it's sports history you crave, PBS announced that it is making the 1994 Ken Burns documentary Baseball available to be streamed for free.